Ray Tune is slowing down lightning model performance by 3x

As the title suggests, when using ray tune, the epoch takes roughly 3 hours, where it plainly takes an hour to complete, here’s the flame graph of the 20 seconds runtime and ~6000 records collected. 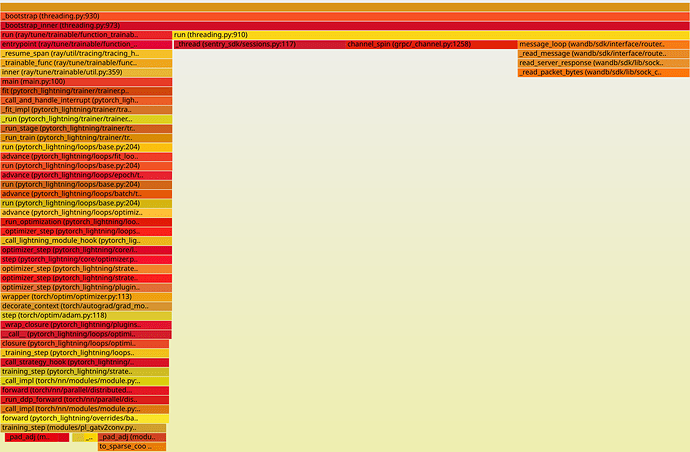 Here is the trainer:

And the ray tuning

hey thanks for doing the profiling! Do you mind sharing a simple code reproduction so that we can test it and fix it?

thanks for the quick reply @rliaw, I’ve edited the post to include the initialization of the trainer and the ray tuning part, I know it would be easier to include a verifiable and complete example, but the model is a bit complex. Do you think we can conclude anything from the above code along with the flame graph and following dump?

Also, although I am decorating trainable with @wandb_mixin, I am using WandbLogger from PyTorch Lightning, because it seems that ray doesn’t expose any custom implementation of WandbLogger so that I’d pass it to the Trainer, so I am only using wandb_mixin to skip the initialization lines.

It looks like it’s wandb’s code that is slowing things down.

I know you definitely want to use wandb but do you mind just removing the wandb mixin for now and see what happens?

I tried actually, here’s the dump without wandb_mixin and WandbLogger

on a separate note, I optimized pad_adj which was taking much time too, that’s irrelevant, just saying because it was referenced in the previous dump.