I’m finding that sometimes tasks sometimes get stuck in PENDING_NODE_ASSIGNMENT and never start running. I’m wondering how to debug this.

What I observe
When I submit a task, one of the following happens:

Oddly, these 3 behaviors all show up when I’m running what seems to me to be near-identical tasks.

I’ve also noticed that while a task is blocked, if I submit another task, that newer task may actually be scheduled. So there’s no system-wide blocking. In addition, this sort of blocking can happen when there’s just a single task.

My question
How do I go about debugging this? I don’t know the Ray internals well enough to have any ideas on the directions I should pursue.

Another thing to try is to bake your runtime env into the docker image and don’t use runtime env.

But please check the logs of runtime env first so that we can know what happened.

The problem has stopped happening since I restarted the Ray nodes. I’ll do that when the issue comes up again. Thank you!

Alright the problem’s back. I took a video of the issue: Loom | Free Screen & Video Recording Software | Loom

I tried looking in /tmp/ray/session_latest/logs/:

Any other debugging ideas?

Runtime_env fails when running Ray in Docker looks like a similar issue, but all my ports are shared between all my ray workers. Here’s me checking the dashboard agent ports are good:

so you have 1 machine, 7 containers connected to the head node (which is running from a machine)?

If you setup the cluster and go to the dashboard (type localhost:8265 from your browser). do you see all 7 worker nodes?

I’ve got 7 docker ray-workers and 1 docker ray-head. So that means there’s 8 total workers, because the ray-head also has a worker. Those 8 seem to show up in the dashboard as expected: 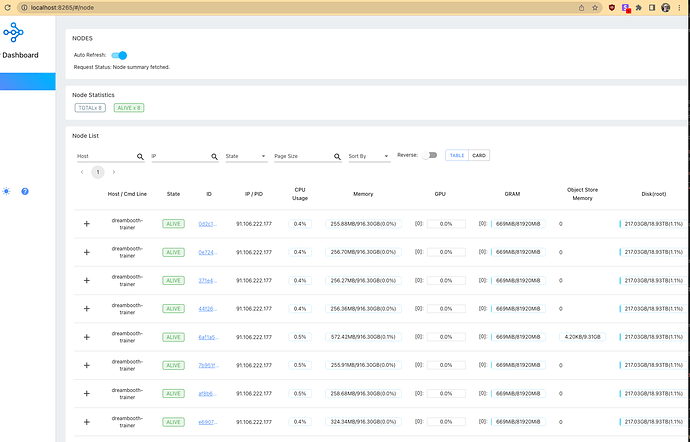 Note that they all have the same IP for some reason.

cc @sangcho this is probably yet another public/private IP problem

Mm! Does Ray not support running workers on the same ip address? I’ve gone ahead and put all the docker instances on different ip addresses, maybe that’ll help.

Let us know how that works after you change the IP addr!

. Thank you all! I’ve been trying things off-and-off for the past few days and I can’t reproduce the problem anymore. It’s hard to be certain, because the issue was sporadic, but this is the most stable I’ve seen it.

@sangcho can we raise an error or warning something if a user does this (many raylets with same IPs)? Seems like an easy gotcha.